“Just came back from very big holiday Himalayan culture tour Nepal-Tibet and Bhutan and Tibet The road journey from Lhasa to Sigatse alongside the Yamadroke Lake, with its stunning scenery, including a glacier. Our guide made sure that as well as the main sights, we also visited some more unusual things like the water powered incense factory. We were fortunate to be invited to visit our driver's home and share lunch with his family. Be prepared some time for changes to your itinerary, treat it as an adventure! It now takes three working days to obtain a visa for Tibet. Also remember that it takes time to adjust to the altitude, we found that after three days we no longer suffered any ill effects.Both the Tibetans and Bhutanese seemed to appreciate the fact that Western tourists want to visit and local people were very pleased to engage us in conversation. I rate 5 ***** for this holiday, Visited March 30th 2018 to 12th April 2018”

“Our holidays is most memorable would be seeing the colourful flags and rolling the prayer wheels at Swayambhunath, the Monkey Temple, in Kathmandu. From this vantage point there is also a fabulous view of the city. The most exciting part was the drive from Kathmandu over the mountains via Daman to Sauraha in Chitwan. The views were wonderful, the small hillside stops were amazing places to visit and the road itself was...well an interesting mix of hairpin bends; part tarmac part gravel and even wide enough for two vehicles - in places. However the most wonderful thing about the holiday was the local people we met.We travelled in April 2018 and were only bitten four times between us but the critters are there waiting for the unprepared! On a more general note be aware that Nepalese people are very poor so don't try to beat them down on the price of everything you buy. Have fun haggling over an item but sometimes make someones day by giving them the top price - the extra could feed a family for a day. Chitwan was on a controlled basis and our entrance fees helped to preserve the animals that reside in the park and support government efforts to stop poaching. Where possible we chose to eat in local restaurants/bars rather than hotels as this helped support local businesses and people. While we used the services of a driver and guide which may not be as environmentally friendly as taking public transport , it ensured that two local people were fully employed .I would like rate 5 ***** this holiday”

“It was whole holiday tour memorable, however I especially enjoyed the trekking and being able to see the 'real' Nepal away from the city. and Be prepared to be flexible with the itinerary! I did not get to see all the sites I was expecting to around Kathmandu, but the unexpected things I did e.g. the visit to the school and the local village, showed how people are living and still recovering from the 2015 earthquake. Do not expect all the luxuries we take for granted at home. During the trek I used a local guide and porters were used. We stopped at local teahouses both during the day and overnight.andI rate this holiday 5 ***** Visited April 2017 ”

I have done Nepal trek with Chitwan National Park safari The splendor of the mountain views, relaxing in the Garden of Dreams, the bustle of the streets of Thamel, and sights in and around Kathmandu. The trekking, the sight of Rhino, Crocodiles and lovely Sambar Deer at Chitwan. Pasaputinath and the atmosphere around the riverside ghats. Be aware there are some long journeys and the roads are poor. Be aware things may not always go to plan. You might want to be advised of your accommodation in advance. Standards will not be what you expect in the west - though I had no issues with the places we stayed. I have used local trekking company in Nepal. All staff are local people. Local people work in hotels and restaurants. We used local places to eat on the trek which was nice. We bought goods and gifts from local shops. I rate this holiday 5 ***** Visited January 2018

Every second will be memorable and Just book and go .. a destination not to be missed. It is also Helped benefit local people I rate this holiday 5 *****  Visited March 09th  2018

It’s nearly impossible to capture into words what an amazing organization Manakamana Treks is! Every part of their group is top notch, from the owner to the guides in each city and especially the driver —just out of this world professionalism and care in their jobs. I am a 58-year-old processional woman traveling alone, and did an 8 day Nepal Culture tour. I felt completely safe all the time. When I showed up in Nepal the owner met with me and told me about my trip intiinerary —also that no one else was on the trip, so basically I had a personal driver take me around Nepal for a week! Complete bliss. In America, they would have canceled my trip but not Manakamana Treks and owner, Achut Karki. I have traveled extensively throughout my life, and I’ve never experienced this high level of consistently professional and personal care and attention to my trip. Many of their group added me on social media, so we will be keeping in touch. I can’t wait to return to Nepal and enjoy my next big adventure with Manakamana Treks! Don’t miss your chance to book a tour or trek with this extraordinary organization! Claire Herbert Annapolis Maryland USA

Keshav, Ram and your good self were all excellent and very attentive guides in and around K’mandu. The tours were all well-paced and nicely spread out over the different days in K’mandu. We especially enjoyed the traditional dinner that you very kindly treated us to as your guests. Chitwan was very good but I would suggest that if a client is very keen on safari’s that you arrange an early morning jeep safari rather than the afternoon one when most of the wildlife is likely to be asleep. The morning elephant safari was very enjoyable. The guide attached to the hotel was OK but not nearly as good as the one who led the jeep safari. Pokhara was a nice peaceful place and a good town to have a “rest day” in. I’m not sure that Ram was planning to take us up to the Peace Pagoda until I asked him to (due to the very steep and rough road to get there – see “Transport” below) but you should make sure that this is always included, as the views from up there are excellent – also a great place to have lunch with a view after climbing the last steps up to the top.

In Bhutan. Our guide and driver were very good and again made our stay there very enjoyable – we never felt rushed anywhere. They were always happy to stop when we asked them to and the guide was very informative at all of the sites we visited. The highlight was, of course, the hike up to the Tiger’s Nest and he was always mindful to help us get to the monastery (and back down again) at our own pace – we got there in 2½ hours, which we were very pleased with!! As all of the meals are included on this part of the trip it is important that the guide asks about anything clients don’t like to eat (which he did; but also explains more about the local dishes that we might not have been able to try if each hotel/restaurant only had the usual buffet-style meals. The guide tended to “disappear” at mealtimes (especially lunch) so we not able to ask him for any specific dishes. However, as there were relatively few tourists whilst we were there, we were able to order several of our meals from the menu and enjoyed sampling the local spicier dishes such as emma datse! Due to a change in flight times we had an extra day in Bhutan which was a good thing in terms of enjoying our time there at a more leisurely pace.

In Tibet: Here our guide was OK but not very attentive; nor was he as informative and knowledgeable as I would have expected him to be. We were there at the end of the Chinese New Year so a large number of places, especially restaurants, were closed. He had clearly not done much research, if any, to find out which ones were open and did not ask us what kind of food we liked or disliked. He found one restaurant near our hotel that was open and that was it – we found other, better restaurants ourselves. Interestingly we were apparently 2 of only 10 “foreigners” staying in Lhasa at that time. The places we visited were all very interesting but we felt that we were being “hurried” around most of them for his personal convenience, not ours.

I returned from a tour of Nepal and Bhutan at the weekend which was organised by Achut and his team. We had to postpone our original date from last year, just avoiding the earthquake so it's been a long-awaited and anticipated trip. The whole 2 weeks was a totally nourishing and wonderful experience, no time for late starts as there was so much wonder to see. Achut and his team were amazing and made sure we were met at all ports, ensuring our safe travel onwards and return. We were also picked up promptly each morning from our hotels. The guides were really knowledgeable especially our guide in Bhutan, who not only looked after us but gently helped me all the way down from the café at the Tiger's nest as I had an injured ankle throughout the tour. The attention to detail was brilliant and although the hotel in Nepal experienced power cuts while we were there, the staff went out of their way to make our stay as comfortable as possible in the circumstances. We were also treated to an amazing meal in Kathmandu on the last night, with some fab dancing and a wonderful atmosphere to send us on our way. The whole trip was so reasonably priced too and I wouldn't hesitate to recommend Manakamara Treks to all my friends and family. Namaste :)

My sixteen year old son and myself have just returned from a tour in Nepal and Bhutan organized by Manakamana Trek and Expedition based in Kathmandu. I was very happy with the service we received from Achut and his various staff. First off, in the months leading up to our trip, my son and I had numerous questions. Achut always answered promptly and fully. There was never any pressure. He has a very relaxed style. Upon arrival to Kathmandu, there was a car waiting for us with my name on a sign. Everytime we arrived anywhere, there was always someone there to meet us. Absolutely all aspects of this trip ran smoothly. The various tour guides were friendly and knowledgeable. Manakamana provides very good service at a very reasonable price. The hotels we stayed in were all reasonable and adequate but if you would like a little more luxury, just let Achut know and he will arrange it. It will cost a little more but would still be far cheaper than tour organizations based in North America. I have absolutely no hesitation recommending Manakamana Treks & Expedition. 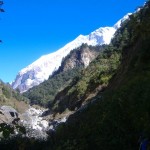