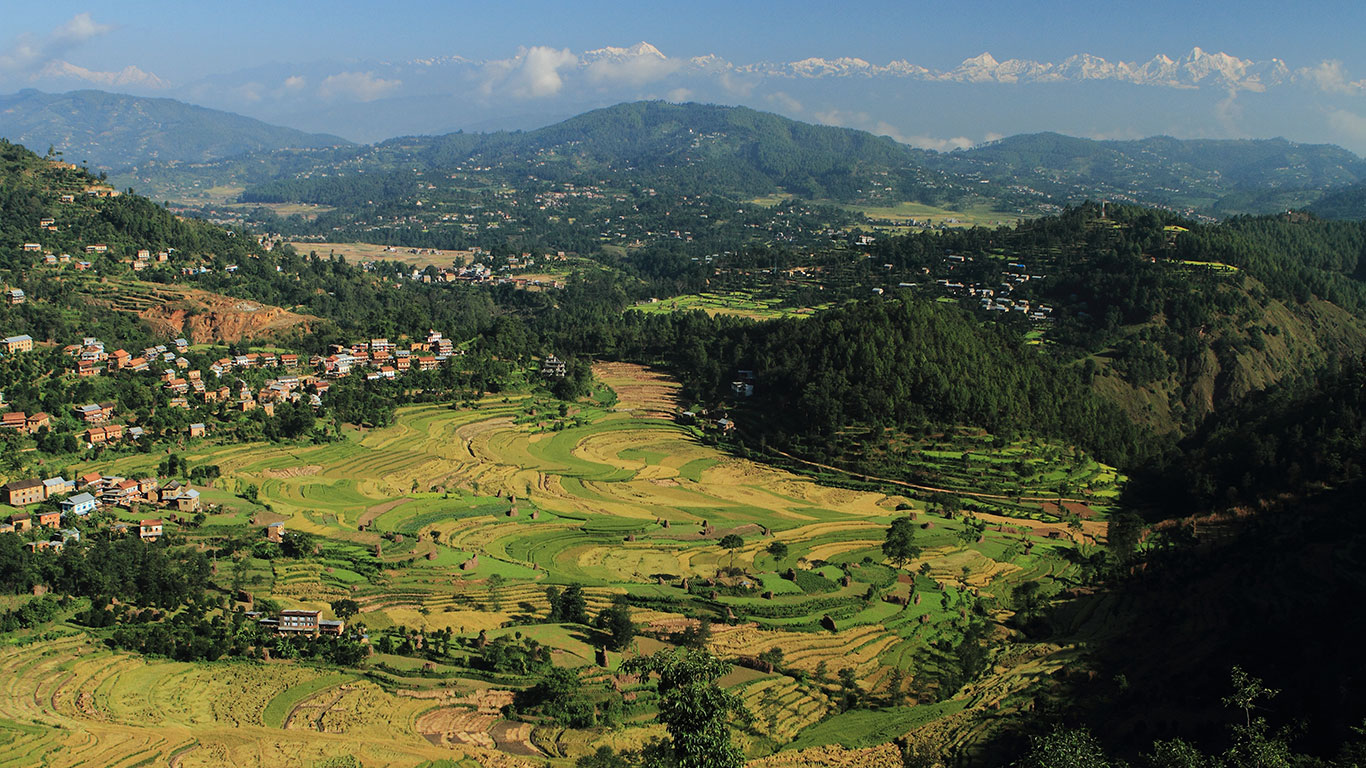 Kathmandu Mandala Tour gives a pleasant moment of hiking on lush hill with excellent views of Kathmandu city, amazing views of Ganesh Himal, Dorje Lapa and Langtang Himalayan ranges. Experience life styles of rural people and visiting in the Hindus shrines, Buddhist stupas and ancient cities can be another attractive part for visitors. Hiking tour givesTop of a hill �Balthali Villag � a small, cozy retreat with bird's eye view of green terrace fields dotted with ochre painted houses and faint hue of Himalayan peaks in the north horizon. It offers a sunrise in the east, speculating Himalayan range of Manaslu, Langtang & Everest in the north, innumerable rice terraces in the west & huge bodied green forest of Mahabharata range in the South.

Prior to landing at Tribhuvan Int'l Airport you could have some excellent views of snow-capped mountains, meet with our tour coordinator and tranfer to hotel.

After breakfast sightseeing tour on Kathmandu Durbar-Square, which it is situated in the heart of the Kathmandu city, it is called also Hanuman �Dhoka- an ancient residence of King. This entire Royal Palace complex is full of historical monuments, Stone statue of Hanuman and next to the Golden Gate of the Palace, the powerful Protector of the entire Durbar-Square. Visit Taleju Temple, one of the tallest Powerful Goddess Temple is 36.6 meter high, Lord Krishna Temple which built in 1649 AD by Kind Pratap Malla on memory of his favorite two dead Queens, Jaggannath Temple, a famous for erotic arts. Visit huge stone statue of Kalbhairab, a ferocious form of Lord Shiva, Living Goddess Temple and Kasthamandap which built on 12th century by wood of single tree, hence Kathmandu obtains its name from this historic building.Visit Swayambhu Nath Stupa which is situated on a hillock, it provides incredible Views of Kathmandu valley and Himalayan ranges. The tradition in the Stupa follows the Vjrayana form of Buddhism which is a tantric variation of the Mahayana Buddhism (the great vehicle). Visit Pasupatinath Temple, literally means" Lord of Animals" and famous Shrines For Hinudes devotees. Two storied golden roofed pagoda style Temple has four silver doors. Enroture visit Boudhananth Stupa, it is called also little Tibet, which Stupa is the largest in South Asia. In surrounding area can experience lifestyles of Tibetan People and monks.

After breakfast 8:00 am Drive to Dhulikhel, and Explore Dhulikhel and then hike to a hill Namobuddha 3-4 hours after panoramic Mountain View in the morning from Dhulikhel.You also could see good view of Himalchuli, Manaslu, Ganesh himal, Langtang , Mount Everest from there. After making a round walk from left at Buddhist Stupa hike to Blathali. Overnihgt at Balthali.

Afterbreakfast 8:00AM Hike down to Panuti. and then drive to Bhaktapur, the city examples of wood-carving. Visit Durbar Square through the Royal Gate, the sparseness of the temple is immediately apparent, compared to the profusion in the Durbar Squares of Kathmandu and Patan. Many of the highly decorated buildings and shrines were destroyed in the 1934 earthquake. However the main square still contains innumerable temples and other architectural show pieces: the Lion Gate, the Art gallery, the statue of Bhupatendra Malla, the Palace of 55 windows, the Bell of the barking dogs, the Batsala temple, the Nyatapola temple and the replica of Pashupatinath. After lunch drive to Nagarkot  for sunset tour. After sunset tour drive back to Kathmandu. Overnight at Kathmandu.

* Sightseeing as per itinerary.

* Tour guide during the city.

*Accommodation at the finest lodges