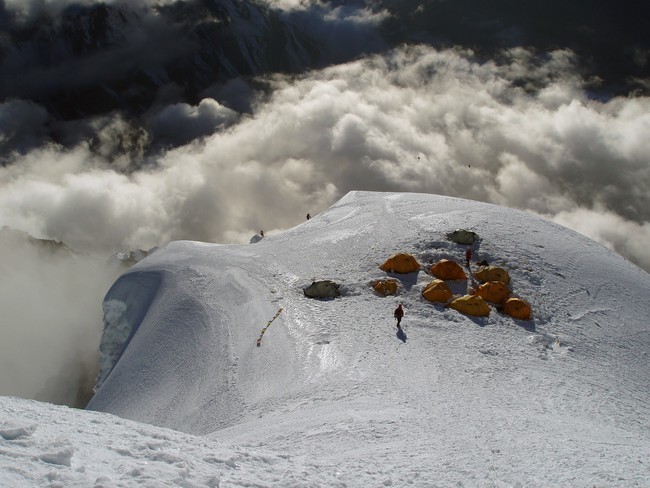 The jewel of the Himalayas. This is one of the most beautiful alpine rock climbmountain situatedin Khumbu region of Nepal, it is a technical mountain for climbing. Our climbing route is classic south-west ridge, an alpine climber's dream route with its ice faces and steep, clean rock in a magnificent Himalayan setting. The summit from the Amadablam provides excellent views of the four world's highest Choyo, Lhotse, Everest and Makalu mountains. We invite you to be part of our expedition. Adventure one step beyond.

Generally three camps are set in the approach above the base camp but only two camps are used to spend the night. The first day expedition is a harder day to ascend Camp I from the base camp. We move up the grassy moraines ridges and passing through a saddle and turn to north climbing up rocking meadows and first camp set in 5725meter. Climb the ridge along with fixed ropes line and crosses rocky area to the Camp II which leads to the top of a Yellow Tower. The climbing route from camp II smoothly changes with steep mixed rock and snow. A superb alpine rock climbing is found on the first step leading snow ridge to camp III. The final pitches of the route are on the perfect 50-degree snow and ice face above Camp III . This face tops out right at the summit.

South- West Ridge Route:
A scramble to camp I
Climbing on rock and snow to camp II.
Climbing on steep mixed snow and ice to Camp III,
The summit day is steep snow 60 degrees.

Experience Required for Amadablam Expedtion : This expedition is one of the most technical and hard expedition. It can be necessary to have good skill on rock and snow climbing with the climbers.

Day 01: Prior to landing in the Tribhuvan International Airport, you could have some excellent views of snow-capped mountains, meet with our tour coordinator and transfer to hotel.
Day 02-03: Preparation day at Kathmandu.
Day 04: Early morning fly to Lukla and trek to Phakding.
Day 05: Trek to Namche Bazaar.
Day 06: Acclimatizing day at Namche Bazaar.
Day 07: Trek to Tenboche.
Day 08: Trek to Amadablam Base Camp.
Day 09: Preparation day at Base Camp.
Day 10-24: Climbing Period.
Day 25-27: Retrace to Lukla.
Day 28: Early morning fly to Kathmandu and transfer to hotel.
Day 29: Free day at Kathmandu.
Day 30: Departure to Airport.

Accommodation : 4 star hotel in Kathmandu and  tea house during the expedition.

Meals : Breakfast in Kathmandu and all meals during the trek