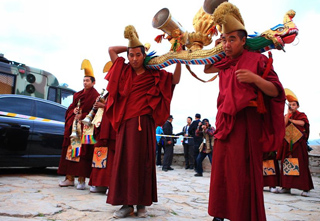 Shoton" in Tibetan means sour milk banquet. As Tibetan operas are performed and Buddha paintings are exhibited at this time, it is also called "Tibetan Opera Festival" or "Buddha Exhibition Festival." The traditional way of starting the Shoton Festival is to show Buddha paintings. The main contents include Tibetan operas and gala parties, as well as wonderful yak racing and horsemanship display. The Shoton Festival starts on the 30th day of the 6th month according to Tibetan calendar (usu. later half of August) and lasts five days. The Gelug Sect regulates that between April and June according to Tibetan calendar, Lamas can only practice Buddhism in monasteries to avoid treading and killing tiny lives. The ban will be lifted at the end of June. At that time, all lamas go out of monasteries and the laymen will offer them sour milk and perform Tibetan operas for them. After 1642, the Gandain Phodrang (Paradise Palace) of the Drepung Monastery became the political, religious and cultural centre of Tibet. Tens of thousands of people rushed there each June 30th to give sour milk to lamas and ask for blessings. The Tibetan Opera troupes and wild yak dancing troupes all came to perform. In this way, the Shoton Festival was formed.

The prelude of the Shoton Festival is the Buddha exhibition in Drepung Monastery, which is held at the foot of the Gebeiwoze Mountain. The tranquil valley becomes excited. With the sound of sutra bugle reverberating through the valley, about 100 lamas will carry the large-scale tangka portraying Qamba Buddha (or Maitreya) out of the Coqen Hall of the Drepung Monastery and step toward the west of the monastery where a special platform is set up for the Buddha picture exhibition. At this moment, the mulberry smoke arises from all directions, bugles resound and scripture reciting goes on. The large tangkathen will be slowly opened up. People rush up to offer white khada. Countless khada fly in front of the Buddha picture, forminga great scene. In no more than two hours, the tangka will be rolled up again and carried back. People will not see it•@until the next year. Then people go to the courtyard of Gandain Phodrang to watch Tibetan Opera. In the afternoon, the activities centre moves to Norbulingka. In the following week, the major activity is to watch the Tibetan Opera. During the Shoton Festival, the Tibetans bring along the old and the young and call on relatives and friends to Lingka gardens. The Norbulinka and other parks of Lhasa are dotted with colorful tents.