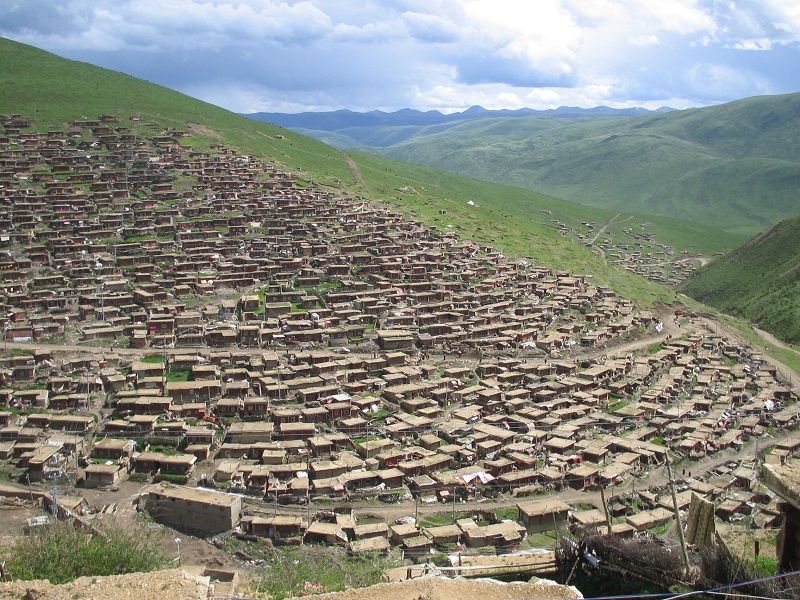 This fascinating two week cultural tour of Tibet takes travellers to many of the region’s most important monasteries that stand at high altitude overlooked by some of the tallest mountain peaks on the planet, including the indomitable form of Mount Everest.

A visit to Everest Base Camp by road provides further insight into the legendary tales that swirl around the mountain like Himalayan clouds with initial acclimatisation in Lhasa allowing travellers to get used to the altitude above 3650m.

Chances to meet pilgrims and monks making their way over mountain trails en-route to Buddhist monasteries and the seasonal palaces of the Dalai Lama conjure visions of life in Tibet untouched by the modern world with your final destination, Kathmandu, further adding to cultural enlightenment.

This two week small group tour is a must for anyone looking to become immersed within the mountains, culture and religion of Tibet on an easy going experience that’s also great value for money.

Day 03: Drive 114km from Kathmandu (1330m) to Kodari (1750m), border town of Nepal. After immigration process in Nepal side, walk 3-4 minutes to the other side of Friendship Bridge. Meet Tibetan guide and vehicle and continue 8km drive to Zhangmu (2500m), border town of Tibet. After immigration process in Chinese side, check in hotel and a complete rest for acclimatization.. Overnight at Zhangmu hotel.

Day 04: After Breakfast, drive 257km to Tingri (4m) crossing Nyalam (3800m) and Lalungla Pass (5050m). on the way visit Milarepa Cave. It was built at 11th Century by Tibetan Magician and peoet who attained enlightment in one lifetime. Overnight at Guest house.tibet tour combine everest basecamp.

Day 05: After breakfast drive from Tingri to Everest base camp.( 5250m). Shortly after leaving Tingri, we turn off the Friendship Highway and head south over the Pang La [5150m] towards the main Himalayan range. and it's provides incredible views with stretching from Makalu to Shishapangma, Below the pass, Everest initially is hidden from view, but as we turn the corner into the Rongbuk Valley it reappears, more impressive than ever. We stay overnight at the Gompa Guest House.(5000M)

Day 06: After breakfast drive to Xigatse - The Estate that Fulfils One's Wishes (12600 ft.) Check into Wutse hotel/Similar. It is situated between 29o 02'N and 88o 08'E in the southwest of the Tibet Autonomous Region where Nyangchu River joins the Yarlung Tsangpo River. Shigatse is the second biggest town in Tibet and it is the center of transportation and distribution of agriculture and husbandry products from the southeastern part of Tibet. "Shigatse" in Tibetan means the "Estate that fulfills one's Wishes."

Visit Shakya Monastery:
It lies 143km to the Southwest of Shigatse. Shakya Monastery, the center of the Sakya order of Tibetan Buddhism, was founded in 1073 by Konchok Gyalpo. During the rule of the Sakyapas the priest patron relationship between Tibet and China was established. Skyapa rulers reigned over Tibet for nearly a hundred years from 13th -14th century. Many of its priceless images frescos, statures, holy scriptures remaining today date back to the time of its founding.

Visit Tashilhunpo Monastery Tashilhunpo Monastery is the biggest Gelugpa monastery in the Tsang region of Tibet. It is located in the town of Sigatse and was founded by Gedun Drup, a disciple of Tsongkapa, the founder of the Gelungpa Sect. Gedun Drup is recognized as the first Dalai Lama. It was first built in 1447 and continuously expanded by the successive Panchen Lamas. The Ngagpa College (Tantric College), one of its four monastic colleges, is the residence of the Panchen lamas. The most amazing image in this monastery is the statue of the giant Maitreya (Future Buddha) erected by the 9th Panchen Lama in 1914. It took four years to build this monumental statue which stands twenty six meters high and is composed of 275 Kg. of solid gold, and a great quantity of precious things such as pearls, turquoise, coral and amber. The 4th Panchen Lama's funeral stupa was built in 1662 and it stands eleven meters high and is covered in solid gold and silver.

Day 07: After breakfast drive 90 Km from Xigate to Gyantse (4100m) which is the 4th largest town of Tibet, situated at the junction of the ancient trade route between Sikkim, India and Tibet. It became particularly famous after the bloody 1904 battle fought by the Tibetans in residsting Yunghusband's expedition. Upon arrival in Gyangtse, visit Palkhur Choide Monastery (The only monastery which contains different Tibetan Buddhism sects in Tibet) and Kumbum Stupa (One of the most magnificent buildings in Tibet which is 6 stories high with 108 doors leading to its inner chambers) . Enroute visit Tashilhunpo Monastery (Founded by 1st Dalai Lama, is the former residence of Panchen Lama. It is famous for its giant statue of Buddha Maitreya which is 26m high) and the Local Free Market (A small but fascinating market, located at the foot of the old Shigatse Fortress).Overnight at Gyantse.Wutse hotel/Similar.

Day 08: After breakfast drive 280km from Gyantse to Lhasa (3650m), capital city of Tibet which first became the capital in the 7th century. Enroute visit Yamdrok Lake. In Lhasa, climate in Summer is one of the mildest in the world. No fear of hot or cold. During Rainy season, it usually rains at night. At daytime, almost everyday is fresh and sunny. In Winter, night time is cold but day time still is mild. Overnight at Sambala hotel / Similar.
Enroute visit Yamadroke Lake - The Sacred Lake (14300 ft.)
Yamadroke Lake is one of the biggest and beautiful lakes in Tibet. We pass by this lake with about 2 hours drive along its bank. Yamadroke means torquise in Tibetan language. In fact, the lake looks exactly as beautiful as torquise blue during the good weather days. This freshwater lake, unlike other Tibetan lakes, is sweet and non-saline, extending for 624 sq. km., in the shape of two pincers of a large scorpion. You can have a short stop on its bank and enjoy photography here.

Day 09 - 10: Visit Potala Palace (Winter Palace of Dalai Lama now more a museum than a palace), Drepung Monastery (The largest monastery in Tibet as well as in the world which once harbored 10000 monks although as a rule it was to house only 7700 monks), Sera Monastery (The 2nd biggest monastery in Tibet, famous for it horse-necked Hayagriva), Jolkhang Temple (The most sacred and oldest temple in Tibet, built particularly for the enshrinement of the Sakyamuni image), Norbulingkha Palace (Summer Palace of the Dalai Lama, where it is possible to visit Dalai Lama's private apartment) and Bhakhor Free Market (The ancient and largest market in Tibet where almost everyone has something to sell). Overnights at Sangbala hotel / Similar.

Day 11: Early morning drive 90km from Lxa to Gongar Airport to connect the China Airlines for flight to Kathmandu. Upon arrival at kathmandu , tranfer to hotel.

Day 12 - 13: (Cultural tour in Nepal)Explore to ancient and historical cities including Kathmandu-Durbar-square with its stone paved lanes colour-full market, virgin Goddess, Temples of different kind of architecture. Pasupatinath, Bouddhanath Stupa, Swoyambhunath stupa. Patan, the city of art and beauty and finally visit Bhaktapur, the city illustrations of wood-carving. Overnight at hotel in Kathmandu.

A visit to Everest Base Camp by road provides further insight into the legendary tales that swirl around the mountain like Himalayan clouds with initial acclimatisation in Lhasa allowing travellers to get used to the altitude above 3650m.