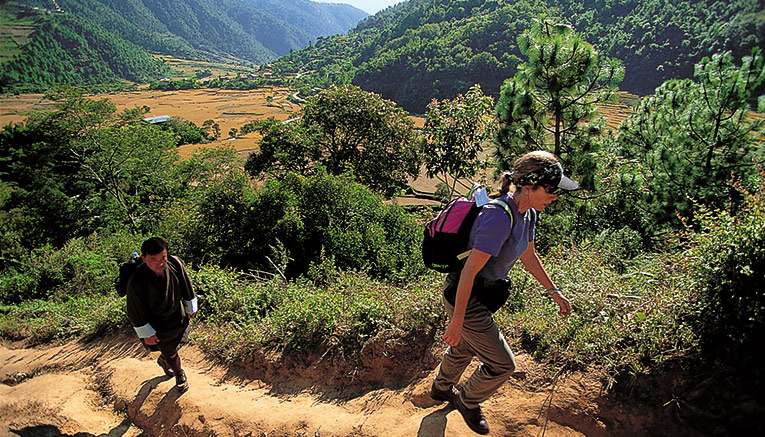 Day 01 :  Fly  from  Bangkok/ Calcutta/ Delhi  to  Paro
Upon  arrival in Paro, you will be met by our Manakamana Treks  and Expedition representative and transferred to your hotel in Paro for one night. Afterwards, visit the Ta Dzong (ancient watch tower) which now houses the National Museum of Bhutan and continue to the Paro Dzong (also known as the Rinpung Dzong), built in 1644 by Zhabdrung Ngawang Namgyal.

Day 02; Hike to Paro Taktshang
After breakfast , We will take a day hike to Paro Taktshang Monastery (Tiger’s Nest). No visit to Bhutan would be complete without a trip to Taktshang. The monastery is perched on the edge of a steep cliff, about 900m above the Paro valley and takes about a 2-hour climb on a well- maintained trail through beautiful pine forest, trees festooned with Spanish Moss and fluttering prayer flags. Legend has it that Guru Rinpoche flew to Paro Taktshang cliff in the form of Guru Dorji Drolo, mounted on a flaming tigress in the 8th century. In the evening, we will drive a distance of 65-km for about one hour journey to Thimphu,  Overnight in Thimphu.

Day 03: Hike to Tango Monastery, Thimphu
After breakfast drive to the end of the road before climbing into the beautiful pine forest, where an incredible Tango Monastery/Tango Buddhist College stands to the farthest north of Thimphu, which is about 14-km away. The Buddhist College is an institution for the higher studies of Buddhist philosophy, metaphysics, poetry and mathematics. The present day monastery was built in 1689 by Lama Gyalwa Lhanampa and was later renovated in 1977 by Her Majesty the Queen Mother Kesang Choden Wangchuck. Enjoy the spectacular views of the valleys and mountains from this spot. Afterwards, there may also be time to visit the Centenary Farmer’s Market on the banks of the Wangchhu River selling farm produces, local arts and crafts, etc.

Day 04: Excursion to Lampelri Botanical Park
After breakfast  drive to Dochula at an altitude of 3,050m. On a clear day, you will enjoy a breathtaking view of the snow capped eastern Himalaya ranges and also a magnificent distant view of the Gasa Dzong from this spot. Then take the walking tour in and around the park at an altitude range of 2,100m to 3,800m between the Thimphu and Punakha districts, which covers an area of 47 sq. km having a rich biodiversity of high conservation value. It is a great learning destination for the students, researchers and nature lovers. The park features a variety of forest types: alpine, cool temperate broadleaf forest, old growth of broadleaf and conifer forests, etc. About 300 species of plants are found in the park including those species of plants and animals with conservation significance such as Himalayan yew (Taxus battaca), Panax pseudoginsend, Tetracentron sinensis, native Rhododendron, Royal Bengal Tiger, Red Panda, Musk Deer, Himalayan Monal and Blood Pheasants. The park is also host to Tetracentron, an ancient relic angiosperm with no vessel in its trunk. The park has 14.5 km of eco-trek trails that takes you through thick oak forest and mountain streams amidst the chirping of birds and the sound of leaves fluttering and falling in the gentle mountain breeze. Marvel at the 29 species of rhododendrons along this trail that have been preserved as part of ecotourism attractions by the Nature Recreation and Eco-tourism Division, Ministry of Agriculture and Forests. Overnight in Thimphu/Dochula.

Day 05 : Thimphu – Punakha
After breakfast drive to Punakha for about 2-3 hours journey. Punakha, at an altitude of 1,300m, was once the old capital of Bhutan and the seat of government until 1955. Today’s tour includes a hike to the fascinating temple (Khamsum Yuelley Namgyal Chorten) built by the Queen Mother of the 5th King to bring universal peace in this world. It is majestically located on a ridge with stunning views of the countryside. There is no temple in Bhutan built as elaborately as this, which took 9 years to build it. A 30-minute drive from the Punakha Dzong takes us to the base of the hill and then cross a suspension bridge and walk through rice fields before climbing a moderately inclined trail surrounded by pine trees for about 1-hour from the car park. Later, visit the Punakha Dzong (also known as the Pungthang Dechen Phodrang Dzong) built in 1637, which is strategically located at the confluence of the Phochhu (male) and Mochhu (female) Rivers. Overnight in Punakha.

Day 06: Punakha – Gangtey via Wangdue Phodrang
After visit Punakha  we head to Gangtey in the beautiful valley of Phobjikha in central Bhutan, which is one of the Bhutan’s few glacial valleys. Phobjikha valley is one of the winter roosting grounds of the rare Black-necked Cranes, where they come in hundreds after spending their summer in Tibet and then migrates to the Himalayas of Bhutan to spend their winter – they arrive in the months of September and October and fly back to Tibet between February and March. They can be spotted in Phobjikha in Western Bhutan, Bumthang in Central Bhutan and Bomdeling in Eastern Bhutan. Along the highway, you’ll photo stops as there are loads of breathtaking views
during the journey. Visit the picturesque Gangtey Gonpa (monastery), the only Nyingma monastery on this side of the Black Mountains. Tonight you will stay in Gangtey.

Day 07: Phobjikha Valley
Early morning begin the day by walking 5-hours through scattered forest of red, pink and white rhododendrons (Rhododendron hodgsonii, Rhododendron keysii, Rhododendron kesangiae & Rhododendron ciliatum) and also enjoy carpets of primulas including anemones, etc. Explore this remote and beautiful valley; meet the local people and the nomads living in black yak-wool tents who rear yaks for their livelihood. Visit the Phobjikha Conservation Centre for the Black- necked Cranes, established in 2003 by the Royal Society for the Protection of Nature (RSPN). The evening is at leisure to relax and enjoy, we have allowed some time for this and also to explore the delightful surroundings of Gangtey in Phobjikha valley. Overnight in Gangtey.

Day 08: Gangtey – Thimphu
This day you will have  long journey heading back to Thimphu via Wangdue Phodrang. The journey passes through the awe-inspiring mountains and lush vegetation along the highway and will photo stops during the journey. If time permits, visit the Craft Bazaar (Authentic Bhutanese Craft) showcasing a wide range of authentic Bhutan-made art and craft products with reasonable price range. The products in its 80 stalls cover all aspect of traditional Bhutanese art and craft sourced mostly from rural areas. Your final overnight in Thimphu.

Day 09: Depart Paro
Early morning drive to Paro Airport and your guide from Manakamana Treks l will accompany you to bid farewell for your onward flight.during the journey.